Home » Is It Vegan » Is Water Kefir Vegan? And What About Kefir? 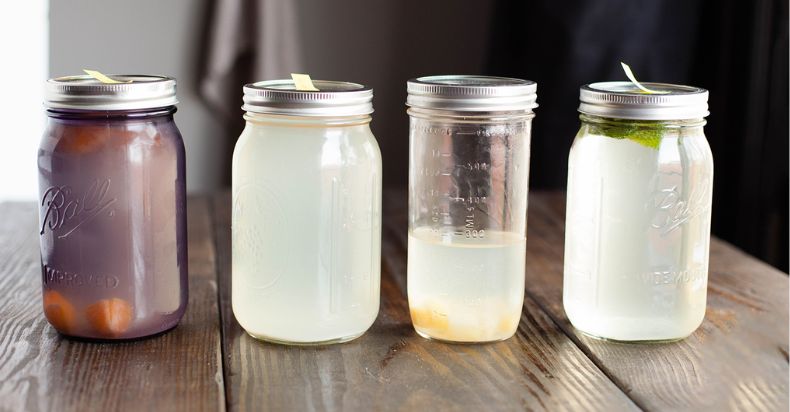 Water Kefir is a fermented beverage that has gained popularity in recent years due to its probiotic properties and refreshing taste. It is made by fermenting water, sugar, and a symbiotic culture of bacteria and yeast known as “water kefir grains.”

With the increasing demand for plant-based products, many people wonder if Water Kefir is suitable for vegans to consume.

In this article, we’re going to explore the ingredients used to make water kefir and whether or not it can be considered vegan and answer some related questions to Water Kefir.

Keep reading to find out more about Water Kefir.

What Is Water Kefir?

Those contained in water kefir include well known probiotic bacteria such as Lactobacillus acidophilus and L. casei; and probiotic yeasts (fungi) such as Saccharomyces boullardii (aka boulardii).

These bacteria and yeasts are responsible for the health benefits of water kefir.

Water kefir is made by placing a specific live culture of specialised bacteria and yeast into sugar and water.

It is left for 24-48 hours (depending on temperature) to get a sweetish, sourish, very slightly alcoholic drink (usually a lot less than 1% alcohol, estimated to be 0.4%) that is loaded with healthy micro-organisms.

It’s very different from milk based kefir or yoghurt, as it doesn’t thicken like they do. Water kefir stays watery. The colour may be lighter than shown in the photo.

Water kefir has a unique taste, slightly sweet but with a sour edge to it, and a light fizz that tingles on the tongue.

The taste and color will vary depending on the type of sugar used, the length of time it ferments for, temperature during fermentation, and other factors.

Water kefir tastes delicious on its own, or you can do a second fermentation adding fruit, fruit juice, coconut water, herbs or spices to give a range of flavors.

It can even develop a good fizz if you tightly seal the bottles for the second fermentation, as the organisms naturally carbonate the drink, producing a natural soft drink or soda.

Like all fermented foods, water kefir can be an acquired taste. Don’t expect it to taste like commercial probiotic drinks, which are usually heavily sweetened. Water kefir has it’s own unique flavour.

Most people (including children) like it and find it far more palatable than other natural probiotic drinks such as Kombucha.

I love it! It also works well in fruit smoothies, adding an extra tang that rounds the flavour beautifully.

For the ones of you, who never heard about it, Kefir is a fermented drink, that is based on cow, goat or sheep milk.

It is made by adding kefir grains (a combination of lactic acid bacteria and yeasts) to milk.

The mixture is then left to ferment at room temperature for 12-48 hours, depending on the desired level of fermentation. The kefir grains are then strained out, and the resulting liquid is the kefir.

Kefir is not vegan friendly because it’s usually based on dairy milk. Unlike water kefir which use water, sugar and kefir grains.

The taste of kefir resembles yogurt, even though it is a little bit sparkly and sometimes tastes alcoholic.

Where To Buy Kefir Culture?

If you are looking for a short answer, buying milk kefir grains from a reputable online dealer is often the fastest and safest way to get kefir grains.

Since kefir grains are living colonies, they’re delicate, making where to buy kefir grains a real issue. Any store is going to have a hard time storing living milk kefir grains, so finding kefir grains near you can be hard.

For me, i tried a health shop first and they told me, that it’s forbidden to sell “living” cultures like kefir.

So, i searched on the internet and I found a brand who is selling kefir cultures for $16.

I don’t know if the product is always available, but you can check here .

How To Make Vegan Kefir?

I opened the jar and cleaned the culture with water, it had the size of a walnut and looked like cauliflower.

I sterilized a jar with boiling water and poured half a liter of soy-milk (cheap kind with added sugar) inside.

Since kefir produces a lot of gas, the jar should stay open.

I decided, that a plastic bag with some small holes would be a good cover, since it protects the kefir from flies or other insects.

The instructions on the internet suggested to stir the kefir after a couple of hours (for an extra creamy result). I did so and used Chinese chopsticks( check these one here), since kefir should not touch any metal.

I waited 24 hours and tried my vegan kefir. The result was super delicious! Slightly sour, refreshing and really authentic!

What To Do With Vegan Kefir?

I consume my plant based kefir in the morning after waking up, even before I have coffee or tea.

I have the impression, that it prepares my stomach for other food or drinks. If I enjoy it in the afternoon, I mix it with oats, fruits, dates and nuts.

The vegan kefir makes an amazing substitute for buttermilk!

Try cakes, pancakes or even vegan ice-cream with your homemade vegan kefir!

Did I See Any Difference In Health After Consuming Kefir?

I like the taste of plant based kefir and I feel very good. It helps my digestion and since I started drinking it, candida did not return.

I am going to wait a couple of months though and check, if I feel any long-term effects.

Even if not, vegan kefir is an inexpensive alternative to vegan yogurt and makes my oatmeal and my cakes even more delicious!

How Many Calories Does Water Kefir Contain?

That depends on how long it ferments. As time passes Kefir Grains consume more sugar.

Generally, the more sour the Water Kefir the fewer calories it contains.

How Does Kefir Compare to Yogurt?

The available yogurt is much less effective than Kefir. Yogurts may be pasteurized killing all beneficial microbes.

Some products contain synthetic stabilizers which make them more difficult to digest.

And most commercial products have less potent probiotics. Specially, the bacteria and yeast found in commercial yogurt are transient meaning they will not colonize your digestive tract.

Kefir also contains beneficial yeasts, such as Saccharomyces kefir, which can dominate, control and eliminate destructive pathogenic yeasts in the body.

They do so by protecting the mucosal lining where unhealthy yeast and bacteria reside, forming an army that cleans up and strengthens your intestines.

The body becomes more efficient in resisting such pathogens as E. coli and intestinal parasites.

If they are beneficial to the existing crystal, they are allowed to stay. The mixture of microbes help defend each other and act in symbiosis to maintain a stable culture.

The group of co-operative bacteria live together and multiply together.

They are able to defend themselves better as a group than any single strain of bacteria could on its own.

Water Kefir Grains use sugar in the process of fermentation. Sugar is the fuel that the bacteria and yeast in the grains use to make energy.

The liquid that cultures grow in is called the growth medium. When there is not enough sugar available in the growth medium for the grains to keep fermenting, they will stop producing energy.

Without this energy, the grains will stop reproducing and will eventually die. These grains contain many types of microbes. Some of these microbes can create, extend, or fix the structure they live in.

Others can defend the structure against “enemy” bacteria. As the grain takes in sugar, microbes inside use the energy to reproduce thus crowding the structure.

To address the crowding, the bacteria capable of maintaining the sugar crystal have to make more compartments for all the microbes to live in.

As the crystal grows bigger and more complex, it becomes visible to the naked eye. This is what we recognize as a grain. As the grain grows larger, part of it will break away and start functioning as a separate grain.

When a grain breaks bacteria good at rebuilding the sugar crystal repair the section where it broke away and the two grains heal becoming two completely separate grains.

Each grain continues to use sugar, grow, break away and heal producing more grains.

This cycle continues as long as fuel is available. This is life!

As with all cultured and fermented foods, a small amount of naturally occurring alcohol is present in the finished product.

With the normal amount being around .08% or less. Shorter fermentation will allow less alcohol production.

How To Freeze Water Kefir Grains?

Kefir Grains can also be drained and frozen in a sealed freezer bag or container, and will survive up to six months in the freezer.

When ready to reuse, take out of the freezer and put straight into sugar water made up as normal.

Don’t use heat, the microwave, or direct sunlight to defrost them first, they will defrost more gently in the water.

Drain after 48 hours and place in new sugar water. This first batch may need to be discarded as it won’t have kefired properly and will contain all the dead organisms killed by the freezing process.

As with dehydrated crystals, it may take a few batches for the Kefir to reactivate and make kefir normally, and a couple of weeks for it to get it’s full exuberance and fizz back.

Give Kefir Grains that’s been dehydrated or frozen at least a month of growing normally in regular changes of sugar water before trying to freeze or dehydrate it again.

Doing this too often will both weaken the Kefir and change the balance of micro-organisms in the grains.

How To Dehydrate Water Kefir Grains?

To dehydrate water kefir grains, drain the water off and spread them out on a clean cloth or piece of mesh, and cover to keep insects and dust off them.

If you have a dehydrator with a thermostat, it’s fine to use but on a barely warm setting, I keep mine to less than 35 degrees C.

Don’t use the oven, microwave, or direct sunlight to dry the Kefir Grains, this will kill them!

If you don’t have a dehydrator, you can spread them out on non-stick baking paper and let them air dry.

When fully dry, they will have shrunk significantly, feel hard and dry to the touch, and look like demerara sugar crystals.

Put them in a clean dry jar in the fridge or anywhere cool and dry, and they should be good for six months.

Is There Anyone Who Shouldn’t Use Water Kefir?

As with any new food, even if you are normally well, it’s best to introduce water kefir gradually, starting with half a cup a day and increasing as tolerated.

Most people have no problem with water kefir, but some people may find it has a “cleansing” effect on the gut causing loose stools.

Because a small amount of fructose is present in the finished water kefir, people with diabetes may wish to monitor their blood sugar levels more closely when introducing kefir.

Ensure the kefir is fermented for at least 48 hours so that all the glucose is used up.

Anyone with known fructose malabsorbtion should avoid drinking water kefir that has been fermented for less than 48 hours.

Ideally ferment for 72 hours, and start with small amounts to observe if any symptoms develop.

Many people with candida (thrush or yeast) problems find water kefir beneficial, as it contains friendly strains of candida which replace the symptom causing varieties, however the small percentage of people who are extremely sensitive to any candida may find their symptoms worsen.

For the majority of people, water kefir is well tolerated and offers significant health benefits, as well as tasting good!