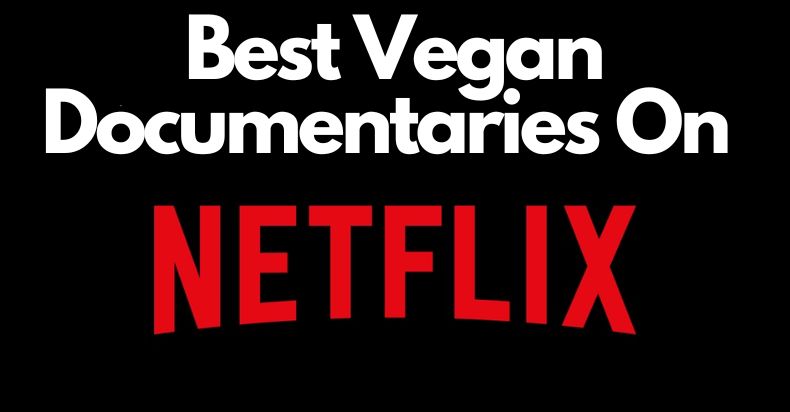 If you’re looking to decrease your carbon footprint, improve your health, or just eat delicious plant based foods, and still need a bit more motivation to go vegan, check out this list of the best vegan documentaries on Netflix.

These documentaries cover various aspects of veganism, including health, environment, and animal rights. They are available to watch on streaming on Netflix.

In this 90 minutes crowdfunded documentary on IndieGoGo, co-producers Kip Andersen and Keegan uncovers the most destructive industry facing the planet today (animal agriculture) and investigates why the world’s leading environmental organizations are too afraid to talk about it.

The documentary explains why growing food organically will not protect the land. Protection for expanded areas of the ocean will not actually protect ocean animals or oceans.

Also, keeping lumber operations out of the Amazon will not save the rain forest.

For instance, every hour 6 million animals are killed for food and 70 billion farmed animals are reared annually worldwide.

In addition, 1,100 activists have been killed in Brazil during the past 20 years.

“Each day, an individual who goes on a vegan diet saves 20 lbs CO2 equivalent, 1,100 gallons of water, 30 sq ft of forested land, 45 pounds of grain, and one animal’s life.” – quote from Cowspiracy.

What the Health documentary examines the link between diet and chronic diseases such as heart disease, diabetes and cancer.

This vegan documentary argues that a plant-based diet is the key to preventing and reversing these diseases and that the consumption of animal products, particularly meat and dairy, is a major risk factor.

The film also looks at the influence of the food industry and medical organizations on dietary guidelines and the promotion of certain foods and nutrients.

It was directed by Kip Andersen and Keegan Kuhn, and is available on Netflix and other streaming platforms.

It is worth noting that some of the information in the film has been criticized by some experts, who argue that it oversimplifies the science and presents a one-sided view of the issue.

This is my favorite vegan documentary.

This interesting vegan documentary follows Mark Devries on a personal journey, as he uncovers the truths (in a respectful way) behind the industry and experiences a change of heart.

Speciesism questions whether an animal’s life holds more value than a human life or placing human palates above those of animals, and also asks:

just because we can control other beings, should we?

”Among the most shocking experiences I had was during an investigating of a factory pig farms in North Carolina.

In each factory, the manure from thousands of pigs at once is liquefied and poured into a giant, open-air cesspool, the size of a lake.

Then, to get rid of the waste, it is sprayed straight up into the air, where it turns into mist and travels to neighbors’ houses, schools, cars, and churches.” – Mark Devries.

“Blackfish” focuses on the treatment of captive killer whales, particularly Tilikum, an orca held by SeaWorld.

The film examines Tilikum’s capture in the wild, his life in captivity, and the deaths of three people that were associated with him.

It also looks at the conditions at SeaWorld and other marine parks and the impact of captivity on the physical and psychological well-being of killer whales. The film was directed by Gabriela Cowperthwaite and was premiered in Sundance Festival in 2013.

It was widely released in 2013 and was shown on CNN in October 2013, and later on other platforms such as Netflix.

The documentary was critically acclaimed and was a box office success, and it has been credited with raising public awareness about the treatment of captive killer whales and the ethics of keeping them in captivity.

The Game Changers is a documentary film that explores the benefits of plant-based diets for athletes and fitness enthusiasts.

The film highlights the stories of several elite athletes who have adopted plant-based diets and argues that such diets can improve performance, reduce the risk of injury, and promote overall health.

The film also examines the science behind plant-based diets and challenges some of the common misconceptions about them.

It was released in 2018 and directed by Louie Psihoyos.

The 90-minute film as a whole is a plea for animal rights, directed brilliantly by Liz Marshall.

The Ghosts in Our Machine follows animal activist and photojournalist Jo-Anne Mc Arthur as she photographs animals on fur farms.

What Jo-Anne McArthur has seen has given her post-traumatic stress disorder.

In addition, she travels with activist Marcus, who explains us that publishing photographs is more damaging to the fur industry than property damage.

“Nothing is more dangerous to animal industries than for people to see what goes on behind closed doors.” – Gene Baur, the curent president of Farm Sanctuary.

This vegan documentary, produced by Tribe of Heart, is about several traditional farmers who refuse to kill animals and begin to see the animals not as machines that produce profit and food, but as sentient, feeling beings that deserve life.

After they convert to veganism as a way of life, their lives are changed forever.

“Slaughtering an animal, it takes something away from you, then it got easier until I didn’t feel anything at all.” – quote from the documentary.

Note – Peaceable Kingdom: The Journey Home (2012) is a newer version of the film.

Forks Over Knives documentary is filled with research and statistics and examines the profound claim that the majority of the chronic diseases that afflict us can be controlled (some even reversed) by rejecting our present menu (standard American diet) of processed and animal-based foods.

Additionally, the documentary recommends a whole foods plant-based diet and emphasizes that processed foods and all vegetable oils should be avoided.

The “A Life on Our Planet” is a documentary film featuring Sir David Attenborough, a well-known naturalist and broadcaster.

The film is a memoir of Attenborough’s life and career as well as a reflection on the state of the planet, focusing on the loss of biodiversity and the impact of human activity on the natural world.

This documentary explores the changes that have occurred during Attenborough’s lifetime and presents his vision for the future of the planet and the steps that need to be taken to ensure its survival.

It was released in 2020. The film was directed by Alastair Fothergill and Jonnie Hughes. The film is available on Netflix.

This is an outstanding American documentary that follows three meat and cheese-loving New Yorkers.

Ellen, a psychiatrist, part-time comedian and single mother, Brian, who likes to eat meat and eat out, and Tesla, a college student who lives with her family who agree to adopt a plant-based diet for 6 weeks and learn what it’s all about.

During the filming, participants investigated the reality of intensive animal farming and visited an abandoned slaughterhouse in the US.

The Cove is an exceptionally well-made vegan documentary that unfolds brief, but disturbing and gruesome imagery around the slaughter of dolphins in Taiji, Japan.

Ric O’Barry is the leader of an activists group which became famous decades ago as the man who trained the 5 dolphins who collectively became ”Flipper.”

But after Kathy, the main “Flipper” dolphin, died in his arms, Ric O’Barry became an uncompromising free-the-dolphins zealot.

The goal of this vegan documentary is to inspire audiences that something can be done, however, younger and sensitive viewers might wish to avoid it.

Fat, Sick and Nearly Dead, directed by Kurt Engfehr and Joe Cross, is a fascinating film that archives Joe Cross’s personal mission to regain his health while traveling across USA and embarks on a 60 vegetable and fruit juice fast.

“Seaspiracy” is a 2021 documentary film that explores the impact of commercial fishing and other human activities on the world’s oceans and marine life.

The film makes the argument that fishing is the leading cause of ocean depletion and that the fishing industry is responsible for the destruction of marine habitats, the extinction of species, and the pollution of the oceans.

It also examines the impact of plastic pollution and the overconsumption of seafood on the oceans, as well as the practices of the fishing industry such as bycatch, ghost gear and human rights violations.

It critiques the effectiveness of ocean conservation groups and certification schemes like MSC and ASC. The documentary was directed by Ali Tabrizi and is available on Netflix.

This is a documentary by German director Marc Pierschel that investigates our relationship with animals, the history of veganism and the environmental, ethical, and health reasons that move people to go vegan.

It is one of the best vegan documentaries on Netflix.

The Milk System is a German documentary that examines the impact of the dairy industry on the environment, animals, and human health.

The film takes a critical look at the practices of factory farms and the treatment of cows, as well as the environmental impact of large-scale milk production.

It also explores the health effects of consuming dairy products and the role of the dairy industry in the food industry. This film was directed by Andreas Pichler.

Tyke Elephant Outlaw, directed and produced by award-winning filmmakers Susan Lambert and Stefan Moore, is a riveting documentary about one elephant’s break for freedom and the profound questions it raised about our connection to other species.

Food Choices, directed and written by Michal Siewierski, explores the impact that our food choices have not only on our own health but also on the lives of other living species on Earth.

As well as on the health of our planet and shows how everything is basically interconnected.

These was the 11 best vegan documentaries on netflix, don’t miss them, they can change the way you view this world.

If you enjoy this reading and you’re feeling generous perhaps share or retweet it.