Home » Vegan Lifestyle » Vegan Definition! What Does It Means To Be Vegan? 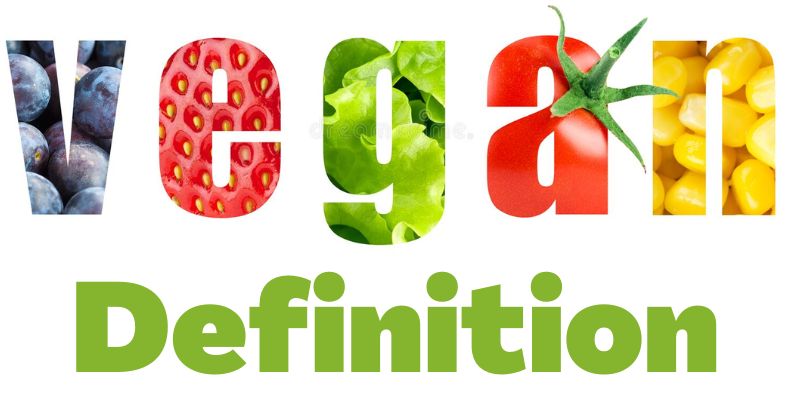 If you find yourself thinking what does vegan means, and wondering about the implications for your diet and lifestyle, here’s the best vegan definition.

“Vegan definition : vegans are people who abstain from consuming animal products for health or ethical reasons. “

Veganism means living on plant based products, with exclusion of flesh, fish, fowl, animal milk, and all dairy industry product (cheese, butter, yogurt, eggs, honey, etc…), and all other foods of animal origin.

It also excludes the use of animal products such as fur, wool, leather, and silk, items like clothing.

It was the ethical controversies, not the health benefits, that were the main position of the cause at the time.

If everyone would strive to do no harm, surely the world would be a better place, even if we are not always successful.

The idea was established in the western world in 1944 by a founder of the British Vegan Society. In the ’60s, the American Vegan Society linked the idea with the Indian philosophy of “ahimsa,” which means “to do no harm.” [1]

Veganism came into being when Watson coined the term. People may or may not have followed the principles of veganism before then, but it is hard to say since before then the term did not exist.

Prior to that time, the term ‘vegetarian’ would have been used to mean someone who ate no meat.

The difference is that vegetarians commonly include animal products in their diet, such as eggs, milk, and cheese.

Vegetarianism is also often taken to include eating chicken, fish, and shellfish.

I have run across this vegan definition, which often seems to arise through a lack of familiarity with the concept of vegetarianism.

Lenten and ritual religious fasts often exclude meat. Due to the lack of a label for veganism in the historical context, and due to the fact that we have to rely on self-reporting for diet claims, it is very hard to say who was or was not vegan.

Claims that any historical figure was vegetarian or vegan should be viewed with skepticism.

They might not have had a clear idea of what was animal, mineral, or vegetable, simply due to the limitations of human understanding at the time.

Another reason to doubt claims of historic vegans is the simple fact of food insecurity.

Famine and hunger often provided ample reason to eat whatever was at hand.

What is a vegan diet?

Vegans give up all animal products such as :

When you think about it, the list includes only a few items. Ideally, these would not be difficult to avoid.

The real difficulty is that these items are used in many products in modern cooking.

The high fat content of animal products makes them tastier. Our bodies crave higher fat, protecting us when food isn’t available for long periods of time.

However, cheap food is always within reach with the modern availability of grocery stores every few miles.

People are more likely to be overfed than underfed. This is one of the main reasons why plant-based diets are becoming increasingly popular.

Even so, there is more than one difference between vegan and vegetarian diets.

Companies selling food products want to maximize their profits, and don’t care much about the health of consumers.

They want to make products that taste good for as cheaply as possible. Even “healthy” products from brand name producers cut costs by adding inferior ingredients, like fillers and artificial flavors.

It is easier to get healthy, quick energy foods at specialty grocery stores from smaller, more trustworthy producers.

Vegans eat food items which can be included by vegan definition such as:

This list of vegan foods encompasses over 75% of the USDA approved food pyramid.

Also, the variety in each of the categories is significantly more than the food that isn’t allowed.

The amount of food that is allowed is many times more than not. With all the variety available, there is no reason to feel deprived.

Someone following the vegan lifestyle purchases products which don’t rely on animals.

The vegan lifestyle is in line with the Indian philosophy “ahimsa,” or non-violence.

Taking the step towards buying all vegan products will have an effect on the following purchasing decisions:

Unfortunately, it is impossible to live a lifestyle that doesn’t rely on animal products to some degree.

The further your research takes you, the more you will appreciate our species’ reliance on animals.

Many believe the western world has developed past the need to rely on animals.

With modern technology, the resources available can sustain us without relying on animals.

Vegans are the main group of supporters of this idea.

They believe the earth’s resources are wasted by raising animals for consumption, and it would be better for the environment.

Luckily, there are many products available which make a cruelty-free vegan lifestyle possible.

To purchase consumer products that fit the vegan definition, like shoes and bags, it is necessary to do research online.

Now you can define vegan, and can see that making the commitment to a cruelty-free diet and lifestyle is honorable.

Not only does your health improve, but you no longer rely on the suffering of other living beings.

Those people who become vegan by diet and lifestyle are truly doing good for the planet and themselves?

Take note of the difference between vegetarian vs vegan ethics.

Those who follow the vegan definition lead by example, and are an inspiration for others.

Veganism encourages alternatives for these and all other materials from animal sources.

Whether you become a vegan due to philosophical beliefs or to improve your health through a plant-based diet, you will reap numerous benefits.

The great news is that, no matter why you become a vegan, benefits abound for you, for animals, and for the environment.

It is fairly amazing to imagine that making some simple changes can have such far-reaching effects.

1-Nutritional and Disease-Prevention Benefits of Being Vegan

When you become vegan, you have little choice but to embrace the vibrant world of fruits, vegetables, nuts, seeds, legumes, whole grains and soy products.

The most common denominator in these foods is that they are whole foods, undergoing little, if any, processing.

Consider some of these exciting health benefits awaiting you as a vegan:

One automatic health boon that occurs when you remove dairy from your diet, as well as any other animal products you might consume, is that you will reduce your intake of saturated fat and begin to improve your cardiovascular health.

3-Pump Up the Fiber Volume to Feel Lighter.

Since most of your vegan food choices will ideally come from whole fruits and vegetables, you will automatically increase your fiber intake, which means healthy bowels and empowering your body to fight against the potential to develop colon cancer.

4-Cater to Your Body’s — and Your Brain’s — Demand for Energy With Carbohydrates.

These little nuggets make the body go, supplying energy to your eagerly awaiting cells and tissues, especially if you are active or have some tasks that require serious mental focus.

But everyone needs the recommended daily value of carbohydrates, and whole foods make it possible to fine tune your intake so you get just enough and too many.

As you drench your body in vitamins minerals through your new diet, you will bolster your immune system and help your body fight all sorts of diseases now and in the future, which include cardiovascular disease, type 2 diabetes, breast cancer, high cholesterol and high blood pressure.

6-You Broaden Your Palate With a Vegan Diet.

It won’t take long before vegetables you once considered bland and boring to take on an exciting new life when they reach your taste buds once you leave behind the vast world of fats, salts and sugars.

With an open mind, you will find an amazing array of recipes you never could have fathomed before.

Perhaps you have chosen to adopt a vegan lifestyle because you have decided to learn more about the poor treatment of farm animals, particularly in large-scale agricultural environments, and you feel you cannot contribute to such practices.

As a philosophical vegan, the treatment of the animals in captivity might not matter as much as they simply are in captivity and that, as sentient beings, you cannot consume them.

You don’t know have to become a vegan activist — though you certainly can — to make a difference, at least according to your own beliefs.

The cost of animal farming high, including feed, land acquisition and management, fertilizer and the amount of water needed.

9-Add All the Benefits of Becoming Vegan Together, and It Makes So Much Sense

Many people fear they will not get enough protein with a vegan diet or that they will miss foods such as cheeses, but protein is rich in plant life, and many industrious vegans have created many analog products to substitute items you don’t think you can stand to sacrifice.

The key is knowing that becoming a vegan will have a number of significant benefits to your health and well being.

It doesn’t take much to make a significant difference in your life and health.

If you enjoyed this reading about vegan definition, and you’re feeling generous perhaps share or retweet it, thank you.