Home » Is It Vegan » Is Gellan Gum Vegan? Is This Food Additive Vegan-Friendly? 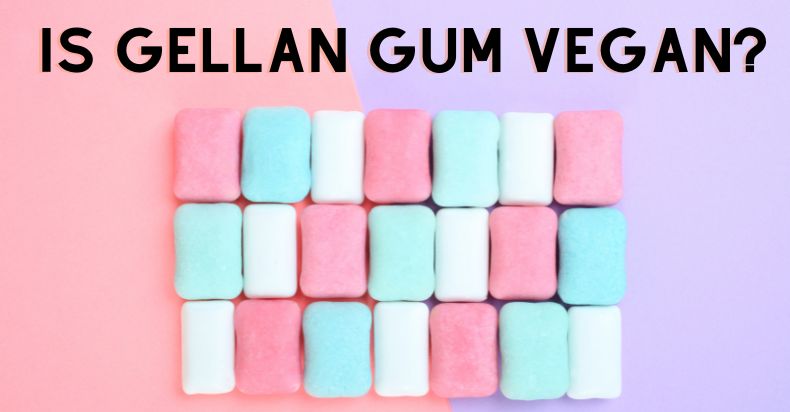 Is Gellan Gum Vegan? I get this question quite often because this food additive is so popular and it is used in a variety of processed foods, including jams, candy, meats, and fortified plant milks.

In this article we are going to examine gellan gum to determine whether it’s vegan or not and take a closer look at this nature-based ingredient  and answers the following questions:

But without further ado, here’s the answer to your question:

Most gellan gums are vegan. Gellan gum is a plant-based gelling agent that is an alternative to animal-based gelatin. But, the manufacturing process can makes it unsuitable for vegans.

What Is Gellan Gum Made Of?

Gellan Gum is listed as an ingredient in most packaged foods, but what is it made of?

Gellan gum is a nature based ingredient (water-soluble anionic polysaccharide) produced by the bacterium Sphingomonas elodea ( a species of bacteria in the genus Sphingomonas).

It is a suitable agar substitute as a gelling agent in various clinical bacteriological media and especially important for the culture growth of thermophilic microorganisms in solid media.[1]

This food additive is widely used as a thickener, emulsifier, and stabilizer and may be derived from a variety of sources such as corn, wheat, or soy.

Yes. Gellan Gum is vegetarian. It is derived from plant based ingredients. No animal products or by-products are used in the production of gellan gum.

You can find gellan gum in a variety of foods, including but not limited to:

For a detailed list of foods containing Gellan Gum, please check this article.

To determine whether or not a product contain gellan gum, you have to check food labels for “gellan gum” or it has E number “E418”, which is a more technical term.

Is Gellan Gum The Same As Carrageenan?

Gellan Gum is similar to Carrageenan as a gelling agents, but is not the same.

Carrageenan is a substance extracted from red and purple seaweeds, consisting of a mixture of polysaccharides. It is also used as a thickening or emulsifying agent in food products.

No. Gellan Gum is not Gelatin, in fact, it’s a plant-based alternative to gelatin.

It is used as a gelling agent to substitute gelatin in the manufacture of vegan varieties of “gum” candies and other foods.

Gellan Gum does not contain any trace of gelatin , alchohol or other ingredients forbidden by the Islamic relegion.

Therfore, Gellan Gum is halal and can be consumed by Muslim people.

Is Gellan Gum Bad For You?

So far, studies done on gellan gum consumption have not found toxic effects.

Further, it has been approved by the USDA for use in organic foods, which makes it a safe food additive.

Gellan gum is vegan and gluten-free. It helps make vegan friendly products look and feel like their non-vegan counterparts.