Home » Is It Vegan » Is Honeycomb Toffee Vegan? 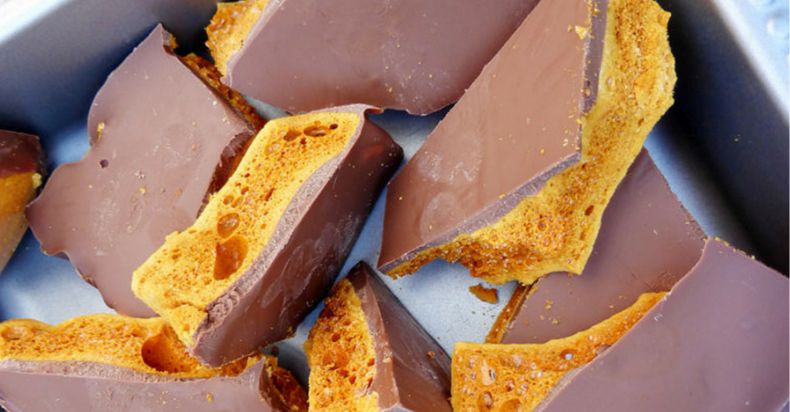 What is Honeycomb Toffee made of? Is it vegan friendly? Well, in today’s post, we are going to take a closer look at this candy ingredients and get you the answers you need to determine whether Honeycomb is vegan or not.

We’re talking about the honeycomb you bake in the oven, rather than the stuff that bees make in their hives!

What is Honeycomb Anyway?

Its main ingredients are typically brown sugar (or corn syrup, molasses or golden syrup) and baking soda, sometimes with an acid such as vinegar.[1]

It is also made commercially and sold in small blocks, or covered in chocolate, a popular example being the Crunchie bar of Britain or the Violet Crumble of Australia.

So is it vegan? Is Honeycomb Toffee Vegan? The answer is Yes.

Honeycomb Toffee is vegan friendly. It is made with plant based ingredients and there is no real honey in it.

Yes. Honeycomb Toffee is vegetarian, because it is made from plant based ingredients.

Please note that we always strive to make sure the information about the products is always as accurate as possible. However, because products are regularly improved, the product information, ingredients, nutritional guides and dietary or allergy advice may occasionally change.

As a result, we recommend that you always read the label carefully before using or consuming any products.

Honeycomb toffee is known by a wide variety of names including:

The short answer is : NO. Honeycomb Cereal is not vegan. Keep reading to find out more.

The Honeycomb Cereal ingredients are :

Honeycomb Cereal contains animal derived ingredients( Honey and Vitamin D3), which makes it unsuitable for both vegans and vegetarians.

Honeycomb toffee do not contain any gluten ingredients, but gluten may still exist in the cereal from other ingredients.

Which makes Honeycomb not gluten free.

Is There Dairy In Honeycomb?

Honeycomb do not contain any dairy ingredients, which makes it naturally dairy free.

Honeycomb is vegan friendly, because they contain no added animal-based ingredients.