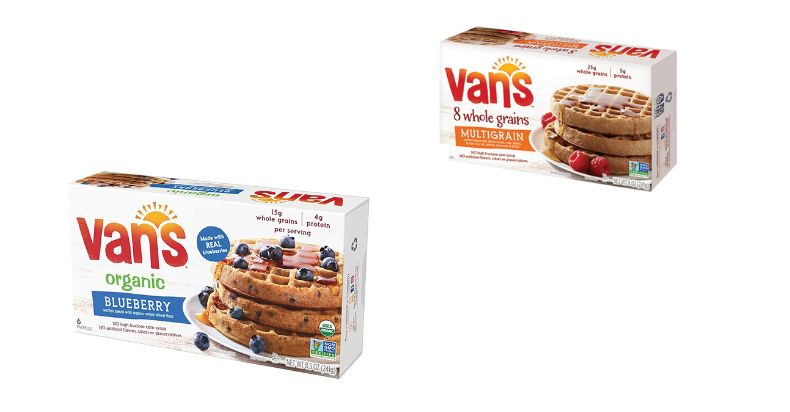 Are you wondering if Van’s waffles are vegan or not? What about all Waffles? Are they vegan? Let’s find out. Today, we are going to uncover Van’s Waffles ingredients and get you the answers you need to determine if they are suitable for vegans.

Van’s is one of the biggest name in the waffle world, owned by the company “Van’s Foods”.

Van’s Foods has been preparing delicious waffles for almost 50 years. Their products are found in most local grocery stores countrywide, but can also be ordered online for home delivery.

Throughout the years, Van’s Foods philosophy hasn’t changed at all. They still care about what customers eat, value artisanal quality and prepare their products in small, lightly processed batches with all the ingredients served fresh.

Moreover, since they want everyone to enjoy their waffles regardless of age, the products are available for kids and grownups alike.

But are Van’s waffles vegan? Yes. Most of Van’s Waffles are vegan friendly. They are free of fish, meat, dairy, eggs, honey and seafood apart from being gluten-free as well.

These vegan waffles are:

The ingredients that makes the rest of Van’s Waffles not vegan are :

Are All Waffles Vegan?

Traditionally no, not all waffles are vegan-friendly because their batter contains eggs and sometimes milk too..

But most brands are thinking of creating vegan waffles, because studies show that consumers choose plant-based alternatives because they feel they’re healthier and taste better.

Most Waffles created by the Van’s Foods are vegan friendly and Gluten free.

They are made with plant-based ingredients to give consumers another way to achieve their dietary goals.

Van’s products are also QAI(Quality Assurance International) certified. This certification is one of the top providers of organic accreditation services internationally.